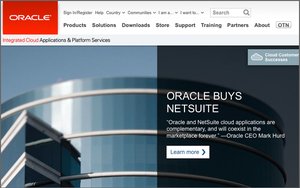 Oracle is moving forward with its cloud business at full throttle, acquiring NetSuite on Thursday for $9.3 billion.

The deal, expected to close by the end of 2016, marks Oracle’s largest acquisition in more than a decade since the company bought PeopleSoft for $10.3 billion in 2004.

The cloud is one of Oracle’s steady streams of business, but it is also one of its most competitive markets, including technology giants Microsoft, Amazon, and Salesforce.

In its fourth-quarter fiscal earnings, Oracle revealed that its cloud revenue surged 49% to $859 million year-over-year, with the company’s platform and software-as-a-service cloud business leading the surcharge with a 66% increase in revenue year-over year.

Oracle’s cloud infrastructure revenue, however, only grew 5% during that same period. NetSuite gives Oracle a much-needed boost in cloud management and infrastructure.

The global public services cloud market is expected to grow 16.5% in 2016 to $204 billion, according to Gartner, and the research firm predicts cloud infrastructure services will be the fastest-growing segment.

Cloud advertising remains the largest segment of the global cloud market, and is expected to grow 13.6% in 2016 to reach $90.3 billion, but cloud infrastructure will become the fastest growing vertical with a projected growth rate of 38.4% year-over-year to $22.4 billion.

Oracle plans to continue investing in the NetSuite product and believes the acquisition will be accretive to its earnings, according to the company’s press release. Oracle declined to comment further about the acquisition and how the company will support the advertising industry.