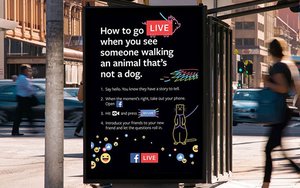 Serious as ever about its video strategy, Facebook on Friday unveiled a major ad campaign for Facebook Live in the United States and the United Kingdom.

Set to officially launch this Sunday, the multiplatform campaign includes TV and out-of-home spots -- including billboards and bus wraps -- as well as digital spots that will run both on and off Facebook’s flagship property.

“The campaign was created by The Factory, Facebook’s in-house creative team,” a company spokeswoman said Friday.

The focus of the effort is authenticity and how Facebook Live is all about capturing people’s authentic selves, Gary Briggs, chief marketing officer at Facebook, notes in a new blog post.

In keeping with that theme, “all of the content for the campaign -- every video, every image -- was shot using Facebook Live on a phone,” according to Briggs.

In fact, many of the videos that went into the TV spots were captured by what Briggs refers to as “real people.”

Since May, the number of people broadcasting live at any given minute has grown by about 400%, according to internal figures. It is clearly an engagement magnet, and Facebook has also seen that users comment more than 10 times more on Live videos than on regular videos.

The success of Live is such a big deal to Facebook that the tech giant has been dishing out around $50 million to coax top media publishers and celebs to use it.