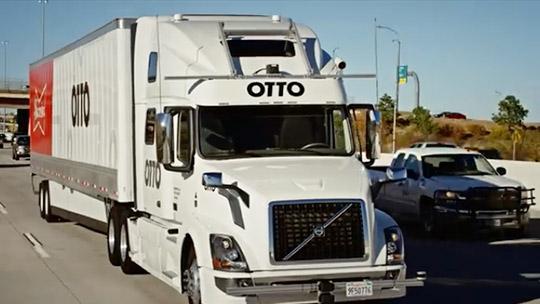 Forget about a future of connected and driverless cars where messaging and other services are made available on in-case screens to people who sit in cars they used to drive.

It’s actually the driverless truck that is moving along at full speed, with a just successfully completed 35-mile highway test of a truck that drove itself in Ohio.

The truck traveled along with regular traffic with a driver in the truck positioned to take charge if something went wrong, which it didn’t. The truck made a 35-mile trek on Route 33, a four-lane divided road.

The maker of the self-driving truck is Otto, a company acquired by ridesharing service Uber a few months back for about $680 million.

Later in the week, the self-driving truck is scheduled to drive on the Ohio Turnpike.

The self-driving trucking test was announced by Ohio Governor John Kasich, who referred to it as “what the future of transportation will look like.”

A similar test was run in Colorado last month, with Budweiser shipping a truckload of beer on a truck that drove itself for an entire stretch of highway, as I wrote about here at the time (52,000 Cans Of Budweiser Shipped 120 Miles In Self-Driving Truck). In that trial, the driver monitored the self-driving system from the sleeper berth in the back of the truck.

So far, these are closely monitored tests, with backup drivers in the trucks. And so far, all have gone as planned.