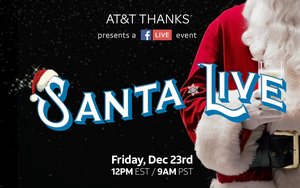 With only three days left until Christmas, Santa’s a busy man right now. But he’s not too busy to take some time to give a shout out to some of the kids on his “nice list.”

On Dec. 23, Santa will take to Facebook Live (in conjunction with AT&T) to read names and stories from his “nice list” and give some insight into what the North Pole is like on the day before the night before Christmas. The program, which begins at noon ET, will depict elves running around getting presents in order and reindeer prepping for their midnight flight.

The program is part of AT&T’s loyalty program, AT&T Thanks. It was devised as a way to thank loyal customers in a way that wasn’t too obvious or promotional, says Ray Page, executive creative director at Possible Seattle, the agency staging the event.

“We wanted to find a way to give back without an overt call-to-action or some other promotion,” Page tells Marketing Daily.

Using social and digital channels, AT&T solicited names and stories from its loyalty program customers. Agency and company executives have been going through the lists to find the best stories for a shout-out during the two-hour program. AT&T will be contacting those who made the list, letting them know when to tune in to see Santa reading their kids’ names, and will send a personalized video to the kids as a memorable keepsake.

Taking advantage of its live format, the program will also include live interactions with the audience to address what’s going on either in Santa’s workshop or elsewhere among the audience, Page says. “The opportunity [to watch] is open to everybody, and there will be parts of the show when the audience will be interacting with Santa,” he says.

The event enables AT&T to show off mobile products and services while experimenting with a new platform for audience engagement, says Gareth Jones, managing director at Possible Seattle. “When a platform like this launches on Facebook, which has tremendous reach, it’s a great opportunity for our client,” he says.