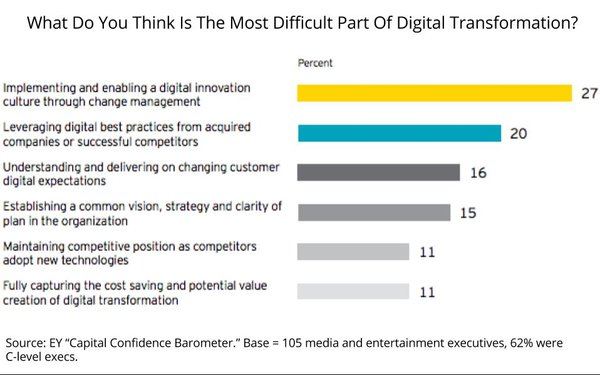 Media and entertainment industry executives have grown less confident about the economy, and cite the volatility of capital markets as their No. 1 concern, according to the 2017 edition of consultant EY’s Capital Confidence Barometer.

The report, released early this morning, shows a precipitous drop in the percentage of industry execs who believe the economy is improving vs. the same point a year ago: 42% this year vs. 60% last year.

Concerns over travel “restrictions” of employees tied with the volatility of capital markets as their chief concern -- cited by 16% of respondents -- followed by “increasing government intervention” and a “slowdown in global trade” due to “protectionism,” which tied with 14% of respondents.

Interestingly, concerns about “cybersecurity” ranked only 6th (10% of respondents), despite a number of high-profile corporate cyberattacks this year.

However, the No. 1 discussion point inside their executive boardrooms in the next six months will be technological innovation, including “new sales channels,” IoT and cybersecurity.

Asked explicitly about their views concerning “digital transformation,” respondents said the implementation of a “digital innovation culture” was their No. 1 challenge (27%), followed by leveraging “best practices” (20%).