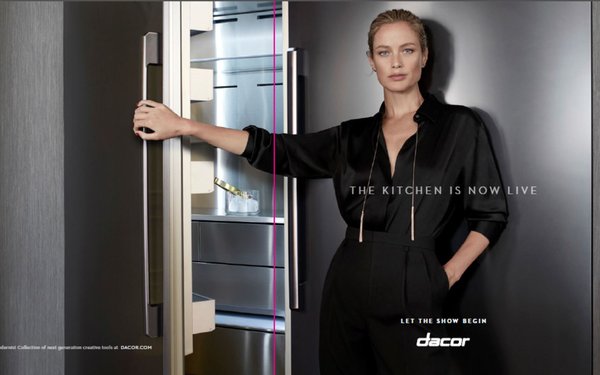 Dacor, maker of luxury home appliances, used the Emmy Awards as its launchpad for its first creative campaign.

The campaign from Team One, included TV spots that broke September 17. The agency won lead agency duties in February after a review. Highlighting Dacor’s new collection, The Modernist, the work carries the theme line “Let the show begin.” It was shot in the style of fashion-advertising and will run through December.

A 90-second spot will live on the Dacor website. Shorter versions ran during the Emmys, on the web and across social media.

The spot and its variations depict a fastidiously tailored and impeccably coiffed supermodel, Carolyn Murphy, assessing a sterile white kitchen space and then using various tools, such as a chainsaw and sledgehammer, to violently destroy it for the purposes of a remodel.

In the blink of an eye, the space is transformed, and the same woman practically caresses the surfaces and interactive touchscreens of the stovetop, refrigerator, oven and countertops, part of The Modernist collection of appliances, shown in graphite stainless steel. Almost as suddenly, a group of her well-heeled friends bursts into the kitchen, ready for a festive gathering.

Two 15-second teasers, "Hammer" and “Glass Drop,” and one 30-second spot ran throughout the Emmy broadcast to tell the story of the remodel. It was the only TV buy for this campaign. “For years, the kitchen has been ruled by rules,” a female voice says during one of the shorter spots. “It’s time to set it free.” In another, the voiceover says: “The kitchen has been treated like a museum for far too long. It’s time to make a little noise.”

Dacor aims to disrupt a category that has traditionally focused on the kitchen for pro-style cooking or as a design museum, while missing the fact that kitchens are about collaborating and entertaining, says Etienne Houseknecht, director of marketing at Dacor.

Each print ad features a single appliance from The Modernist collection such as a refrigerator or stove, with the theme line, “The status quo is starting to sweat,” and in smaller print, a description of the product’s capabilities.

All creative executions are intended to drive customers to the Dacor web site to further interact with the brand and its place among modern home entertainment.

The strategy behind the work was inspired by learnings from Team One’s Global Affluent Tribe research. GAT, a continuous study since 2010, focuses on the lasting values and emerging expressions of how affluent consumers, around the world, aspire to live.

Stereotypically, the affluent lifestyle was personified by unapproachable individuals and their out-of-reach objects put on gallery-like display behind velvet ropes, says Mark Miller, chief strategy officer at Team One.

“That stereotype has since been replaced by the actuality that modern affluents place a real value on deep, not superficial, relationships, and prioritize meaning over mere possession,” Miller says in a release. ”In turn, the idea of kitchens as museums needed an update.”

Team One handles all creative, digital, experiential, media planning and buying for Dacor. The shop also has created behind-the-scenes content for the client’s web site and is involved in product development.