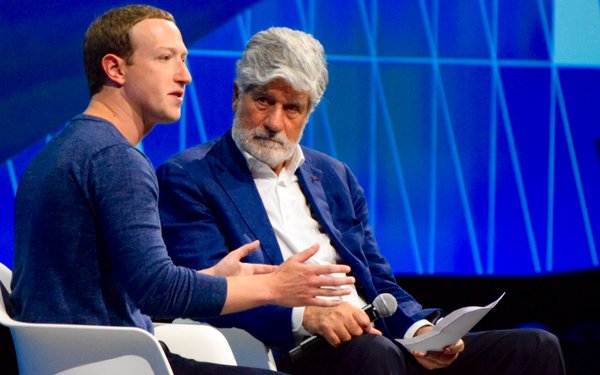 He seems so lifelike in person, but Mark Zuckerberg sounded like a robot at VivaTech18, where he wouldn't divert from corporate speak about how Facebook is actively doing good after its recent scandals.

During his evening discussion with Publicis Groupe's Maurice Lévy at VivaTech today, Zuckerberg admitted once again that Facebook did not take a broad enough view on mitigating misdeeds across his platform.

"It's not enough to give people powerful tools -- now we need to go even further and proactively support the good and mitigate the bad," he said. "That is a big thing for us."

Zuckerberg also stated the obvious -- "everyone cares about privacy" -- before explaining how Facebook has always prioritized control and transparency. "About one hundred billion times a day, every day, they have control over who they want to share their content with," he says of the platform’s users. One of the things that good regulation can do is increase public trust that these systems are working and respecting what they want, he says.

Because giving people control over how their data is used, GDPR adds some new controls for the platform -- but overall it isn't such a "massive departure," he said, adding that Facebook has always had many of the policies required by these new regulations.

Facebook has been rolling out its full GDPR compliance for a while, and one interesting lesson is that the "vast majority of users choose to opt-in" to their new policies. In terms of data use, in terms of ranking feed, he said, “people want us to use data to make services better.” While Facebook will allow users to clear their browser history, he says it won't improve their experience. "The idea is look, news ranking may be worse for you. Ad ranking may be less useful."

But it's fundamental that people will have the decision to make, he believes. That said, Facebook will always be ad-supported because it is the right business model if "you want to connect everyone around the world" -- especially those who cannot pay for services, he says.

Zuckerberg again admitted to being slow to recognize Russian interference with the 2016 election. Now, they are proactively helping to prevent similar circumstances in France, Germany, and the Alabama elections in the U.S.

In addition, any user can now go to an advertiser page where they can see all ads aimed across audiences -- even ones that are not targeted to them, he says. “If you asked me 10 years ago, this type of interference at Facebook wouldn't have been on my radar then, but now we have to make it much harder to interfere with elections.”

Zuckerberg's appearance at this technology festival certainly resembled a support rally with attendees giving him a round of applause and standing up on chairs to better take photos of the often-embattled executive.