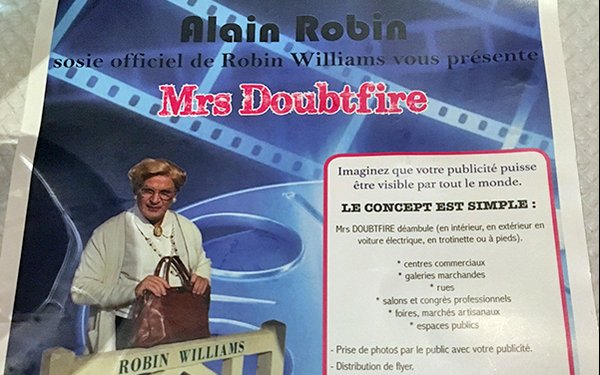 While big-name star power may be lacking at this year's Cannes, Y&R had perhaps one of the best sightings during its annual friends and family pizza dinner: a performer vamping it up as “Mrs. Doubtfire” the iconic cross-dressing title character (portrayed by the late Robin Williams) in the 1993 theatrical release.  No one was sure how or why this person crashed the party, but the many attendees were nonetheless entertained by his/her antics.

The party itself was one of the more popular of Cannes with the relaxed setting on the beach and lots of tasty pizza and other comfort food delights. Global CEO David Sable's inviting attitude was a contrast to many of the more formal and exclusive festivities. Sable was seen pouring wine and making sure guests had everything they needed food-wise.

Comparatively, the women-only Girl's Lounge Dinner was exclusive, with hotel guests at the place hosting the event frustrated that the long line to access the elevator prevented them from returning to their rooms. Apparently the pre-Cannes suggestion that women wear only black isn't happening this year, as only a handful have draped themselves in that color.

Football (soccer) viewing parties seem to pull people away from the traditional gatherings. Yahoo transformed the infamous Gutter bar into its own purple branded tournament party where people were glued to the TVs.

Perhaps the juiciest gossip making the rounds is talk of the timing of a reported FBI Investigation into media-buying practices with the departure of Martin Sorrell as CEO of WPP. The suggestion is that Sorrell himself might be a whistleblower. The main debate among Cannes attendees is whether he is ultimately interested in revenge or his legacy.

Maybe he will elaborate at one of the two appearances he's making at the festival later in the week.