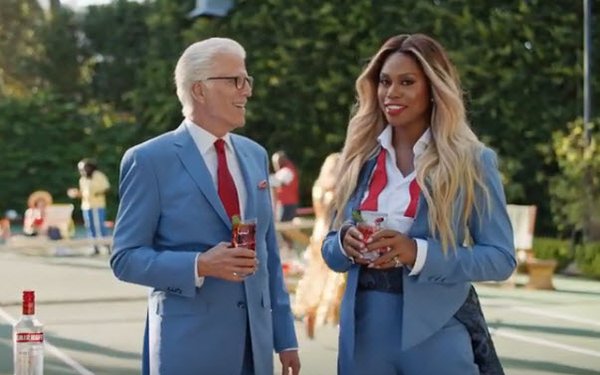 Called “Welcome to the Fun%,” the campaign, from 72andSunny, “celebrates good times with a quality product that everyone can afford,” in the words of the Diageo spirits brand.

“Fun%” is defined as “anyone and everyone who wants to have accessible, unpretentious fun,” and the diverse celebrities featured in eccentric, creative partying modes — with Danson’s presence as the unifying element — were selected to emphasize the inclusiveness message.

While there’s a 30-second anthem version on YouTube, the multiple ads created for TV this time around are limited to 15-second format (example featuring Danson and Byer below), joined by six-second digital ads. In all, there are a dozen ads.

Danson was also featured in last year’s similarly themed “Only the Best for Everyone” campaign, also from 72andSunny, which included 30- and 60-second spots.

In addition to the videos, Smirnoff is rolling out a series of out-of-home ads in New York City, Chicago and Los Angeles, as well as content on the brand’s social media platforms.