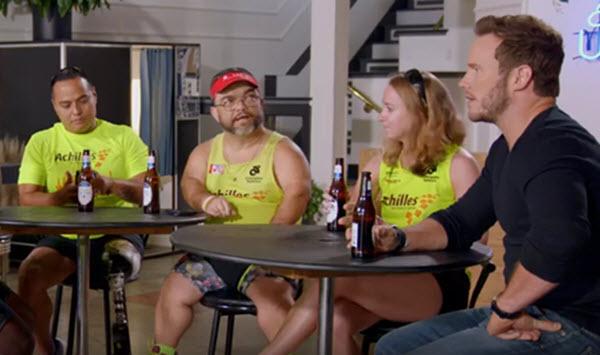 Michelob Ultra is amping up the inspirational quotient for its second year of sponsoring a team for the TCS New York City Marathon.

The Anheuser-Busch beer has invited members of Achilles International -- a nonprofit dedicated to empowering athletes with disabilities to participate in mainstream running and other sports -- to join its team of “beer-loving runners.”

The surprise invitation was extended by brand rep Chris Pratt, of “Parks and Recreation” fame (above right).

A video of that encounter (below), from the Laundry Service agency -- in which several Achilles International runners also share their personal stories -- has now been posted on the brand’s YouTube and other social channels.

In addition, the brand is encouraging fans to “make this beer run count” by buying Michelob Ultra to trigger a donation (for each case sold) to Achilles International.

Michelob Ultra is also supporting its marathon participation with digital ads, PR, promotional activities during the weeks leading up to the race and during the race itself, and post-race celebrations, a brand spokesperson tells Marketing Daily.

In June, the brand announced that long-distance running star Shalane Flanagan is the team’s coach this year, and ran a consumer contest to choose 95 members for its team.

The marathon participation ties in with the message of Michelob Ultra’s “You Can Do Both” campaign, from FCB Chicago: With just 95 calories and 2.6 mg carbs, Michelob Ultra lets people with active lifestyles also enjoy the taste and fun of beer.

Michelob Ultra invested in two spots for the campaign during this year’s Super Bowl. In one ad, Pratt was shown “training” by using Michelob Ultra bottles to do curls; in the other, he was joined by pro athletes, including golfer Brooks Koepka and surfer Kelly Slater.