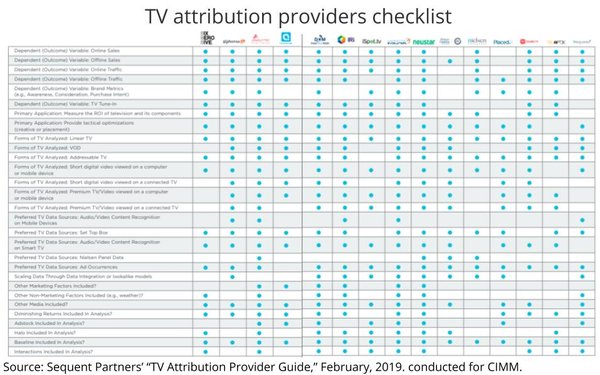 The report, which was commissioned by CIMM and the American Association of Advertising Agencies (4As), will be presented at the 8th Annual CIMM Cross-Media Video Measurement & Data Summit in New York City today.

As the report explains, attribution simply is the “science of allocating credit” to media that drive a marketing outcome, usually defined as sales, but occasionally some other KPI (key performance indicator).

Modern day attribution modeling emerged first with digital media, because of the abundance of data available for tracking the end-to-end performance -- from exposure through action -- but as Sequent’s “TV Attribution Provider Guide 2019” notes, the proliferation of smart TV and set-top-box data has made it possible for providers to develop similar methods for modeling the effects of TV advertising exposure.

In addition, the report assesses suppliers that are going beyond endemic TV attribution to integrate TV into so-called “digital multi-touch attribution” or “cross-channel attribution.”

“It is exciting and promising, but also confusing,” the report notes, adding: “There are a vast number of analytic providers and a wide variety of approaches. There are many disparate television viewing datasets that fuel the analyses. And, depending on the provider, there are a host of additional variables that may or may not be brought in to fully explain television’s impact.”
advertising, attribution, digital, research, tv
Next story loading