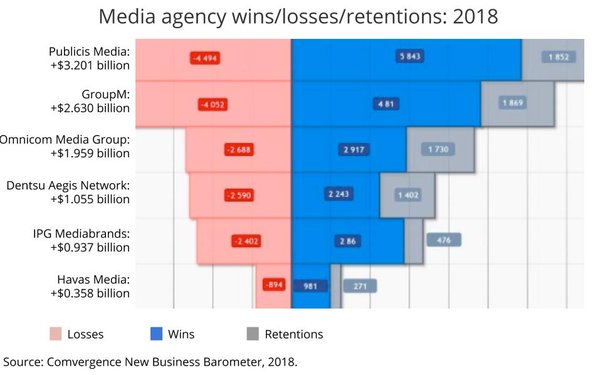 With net new business gains of $3.201 billion, Publicis Media Group was the winner of the major agency holding companies' media account services reviews in 2018, according to this year's edition of Comvergence's New Business Barometer.

Looking beyond the big agency holding companies, "all others" including independent media services agencies and smaller shops not associated with the holding companies, would rank second with a net new business aggregate of $3.1 billion.
"This includes Horizon Media ($1.1 billion) and Wieden+Kennedy ($210 million) in the U.S.," Comvergence's report notes.
Another interesting finding is that media agencies -- by and large -- are doing a worse job of retaining current business.
"The average account retention rate in 2018 was 25% versus 26% in 2017 (and 31% in 2016)," the report notes, adding: "Holding on to clients remains increasingly challenging for incumbent agencies."