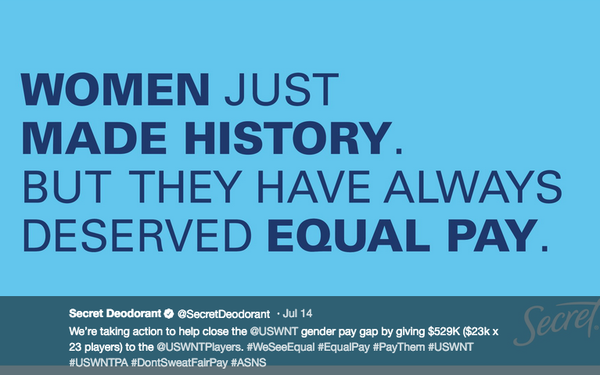 Secret deodorant’s decision to  donate $529,000 to the members of the U.S. Women’s National Soccer team is the latest piece of gender- and equal rights-related news recently generated by a Procter & Gamble-owned brand.

The soccer announcement, made through a full page ad published in Sunday’s New York Times, gives $23,000 to each of the 23 World Cup-winning players. The players have made headlines throughout the tourney by highlighting the huge pay gap between women’s and men’s clubs.

The ad is headlined “Women Just Made History. But They Have Always Deserved Equal Pay.”

“As a brand for women run by women, Secret wholeheartedly believes women should not have to sweat being paid fairly,” Sara Saunders, the associate brand director for Secret, says in a statement. “We have supported this history-making team all year long, and we are focused on driving advocacy and action for systemic change.”

The text also explains that “23 pairs of chromosomes make up one winning athlete, female or male. 23 is a prime whole number. It can never be divided. 23 is the number of strength.” (The italics are as they appeared in the ad.)

Perhaps predictably in these fractious times, Twitter reaction to the announcement  was passionately split, for and against.

“I’m allergic to a lot of deodorants, so I’ve used Secret for years.  My wife uses it too,” a tweet read.  “We will no longer purchase your deodorant. I’d rather have a rash or smell like your politics.”

Said another, “ I've never been loyal to any one deodorant brand. That changed today. Thank you @SecretDeodorant [for] supporting women and equal pay.”

P&G brands must be getting used to that strong reaction.  The company’s Gillette subsidiary set off a brief, passionate flurry of opinions for and against in January after it introduced an ad titled “We Believe,” emphasizing that modern men shouldn’t be all about fighting and ogling women.

In May, Gillette debuted an ad showing a transgender man experiencing his first time shaving.

Secret is not all alone in its crusade for gender equity in sports. In May, Luna Bars offered each player on the U.S. Women’s National Soccer team $31,250 to help erase the pay gap.

“These are some of the most powerful corporations, not just in sports but in the world and have so much weight that they can throw around,” she said. “And I think that they just need to get comfortable throwing it around.”

Secret says it has consistently  “proudly supported women’s advancement by portraying confident, modern women in its campaigns and communications.” But critics of cause marketing say that if a brand isn’t careful, it can be seen as simply exploiting a subject to gain customers.

Secret began its association with the women’s team a year ago, and in March announced a partnership that was “an extension of Secret’s new ‘All Strength, No Sweat’ campaign.”

Part of that marketing effort included a new video, “Cheer for Each Other,” that began with U.S Women’s Team forward Alex Morgan saying, “When you cheer for me. . . “ followed by a young female player finishing the sentence by saying, “you cheer for me.” Then, more girls and young women follow, adding, “And me.”

The brand also created a YouTube  video with CNN highlighting the issues that caused women’s U.S. soccer players to sue the team for gender inequality in March.