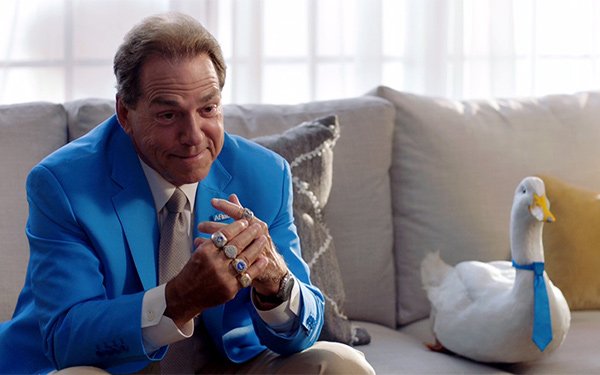 Launching on ESPN Saturday, Aug. 24 to coincide with Aflac’s new sponsorship of the Southeastern Conference, the creative features Saban sitting alongside the Aflac Duck on a couch, talking with a man and his wife as he touts the benefits of Aflac insurance. The ad ends by showing Saban's numerous NCAA championship rings.

This first ad will be followed by two subsequent spots, “Campus Tour” and “Commitment Day,” debuting midseason and during the SEC Championship game, respectively.

“During football season, Coach Saban and the Aflac Duck will take us on a recruiting journey that parallels Aflac sales agents’ efforts to recruit new policyholders,” explains Shannon Watkins, vice president of brand and creative services at Aflac. "We’ll follow them from the home visit to the campus visit and, ultimately, to signing day.”

Aflac works with a portfolio of creative agencies for integrated campaigns like this, including Publicis Seattle for broadcast creative, Spark Foundry for media placement, Dagger/Atlanta for social media and Melt/Atlanta for football conference collaboration.

Aflac will integrate the new campaign into its social-media presence, as well as its long-running “Aflac Trivia Question” on CBS and ESPN, which is being revamped to feature enhanced animation.

In addition to continuing its support of ESPN, CBS, Home Team Sports and Raycom Sports, Aflac is adding the Southeastern Conference and the SEC Network to its media focus.