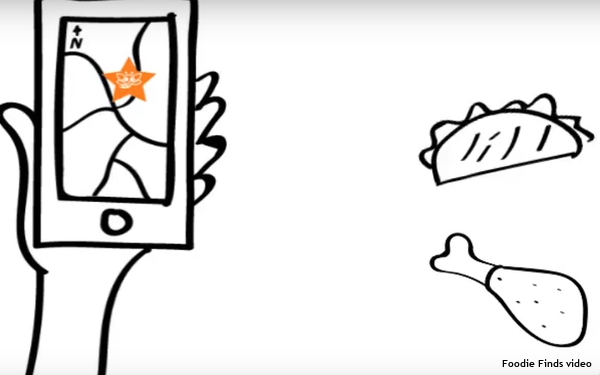 Within the past year, Burger King has used augmented reality to visually enhance its menu offerings and reward people for “burning down” competitors’ ads via in-app, AR technology.

While the aggressively competitive behavior appears to have subsided, it’s bound to return—probably bigger and bolder, thanks to continuing advances in AR.

In the meantime, a new AR app from Florida-based SugarTrek called Foodie Finds lets restaurants show off their food and uses artificial intelligence—combined with location tracking—to recommend specific dining locales based on user preferences. Restaurants photograph their food items and Foodie Finds turns them into augmented visuals within the app.

In this promotional video, Foodie Finds asks restaurateurs “What if you could virtually wave your best-selling dish under the nose of a potential customer right at the moment they were deciding where to eat?”

COVID-19 deters and accelerates, respectively, specific consumer behaviors, according to Matt Maher, founder of M7 Innovations, which has worked with Domino’s and Panera in conjunction with 3D image provider QReal.

“On the downward trend is the sense of touch, travel and congregating in restaurants,” Maher tells Marketing Daily. “On the accelerant side, we’re seeing increased smartphone usage and content consumption, higher propensity to order delivery and a craving of variety.”

The latter three factors set up AR as a medium for restaurants to showcase their dishes to consumers in high-fidelity, 3D models and entice them to purchase.

“When the clouds part and consumers get back to an in-dining experience, I’m confident they’ll forgo picking up a communal menu and instead rely on their smartphones to not only browse the restaurant’s selection, but experience each dish in AR on the table in front of them,” says Maher.

A year ago last month, Burger King used AR in a campaign that rewarded mobile phone users in Brazil with a free Whopper for pointing their camera at print, coupon and billboard ads of BK competitors and setting them aflame, as seen in this video.

“That was a very successful campaign,” says Maher. “The second the ad was burned down, it put a Whopper in their cart. So it was actually a value exchange for consumers.”

As AR technology improves, brands need to create unique experiences that provide value to their customers, according to Harold Jones, technology partner at the WorkInProgress agency.

“The use of AR itself is still new behavior for the majority of consumers, as they are not used to pulling out their phones and scanning environments,” Jones tells Marketing Daily.

“[AR] needs tobe clearly promoted and hands need to be held along the way. Moments have to be created to leverage AR in a guided manner.”

Apple’s little-publicized, proprietary AR technology uses LiDAR—light detection and ranging technology—as found in the latest iPad Pro, to be followed by the next iPhone iteration. Some predict that it will end up in Apple’s long-awaited AR glasses.

Among other applications, the LiDAR technology will allow people to experience AR product viewing and placement features made popular by companies like Warby Parker and Ikea—but without the apps, according to Maher.

“Apple will be able to provide an end-to-end customer experience and dominate ecommerce,” he says.

This is because Apple users will be able to virtually try on a pair of, say, Warby Parker glasses and purchase them immediately with Apple Pay “all without ever going to a Warby Parker store, using their app or going to their website.

“The entire experience was delivered by Apple—from searching, to trying [glasses] on, to purchasing them. That’s huge,” adds Maher.