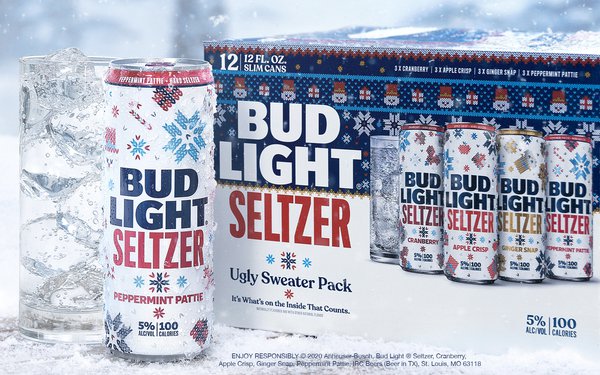 It’s not that time of year. Regardless, Bud Light Seltzer on Nov. 2 will launch the special Bud Light Seltzer Ugly Sweater variety pack, with new flavors, in honor of the traditional holiday season that often holds off until after Thanksgiving.

Hard seltzers are new enough that playing with flavor profiles may not rile its consumers, who might compare the category to conventional seltzers or craft beers, which often change flavor profiles.

The seltzer, third-best-selling in the category, will temporarily add three flavors -- Apple Crisp, Peppermint Pattie and Ginger Snap -- and dress them up in an ugly-sweater-like can and 12-pack container. Cranberry, an existing seltzer flavor, makes a costume change for the season, too.

A spokeswoman said Bud Light Seltzer has no plans for special advertising the collection, except on its social sites.  On Twitter, the brand has touted that the Ugly Sweater variety pack was coming. Reaction has been mostly positive, and includes a few tweets from fans who want eggnog- or sugar-plum -flavored varieties.

“Since we first launched Bud Light Seltzer, fans have really enjoyed our delicious flavors and the fun we have brought to the entire seltzer category," said Colleen Lucas, senior director of marketing for Bud Light, in a press release. “Our new Ugly Sweater variety pack builds on these pillars while also adding some holiday cheer in the form of tasty flavors which have become very popular around this time of year.”

It seems a stretch to call Bud Light Seltzer’s original flavors “pillars,” exactly. The brand only celebrates its first birthday in January. But seltzers don't seem to forget their past, even if they have a short one.

Bending a bit to consumer demands, White Claw, the best-selling hard seltzer and oldest of the big sellers, announced three new flavors in March: tangerine, watermelon and lemon. The brand thought that was historic.

“Since our launch in 2016, we have only launched six flavors -- it takes time to perfect a liquid worthy to bear the White Claw name," said Phil Rosse, president, White Claw Seltzer Works, in making the announcement.

Meanwhile, beer makers often market their brand on how old it is.

Budweiser, which dates back to 1876, claims on its bottles that it’s “brewed by our original process” and in an old-timey typeface makes other nods to its special Beechwood Aging.

It does mess a little with labels, however.  At this point in 2016, “Budweiser” was replaced on the label by “America.” That was a temporary rebrand it adopted from May 23 to Nov. 8 that year in honor of the upcoming election, so that the beer would “inspire drinkers to celebrate America.”

It’s hard to gauge if that was a success.