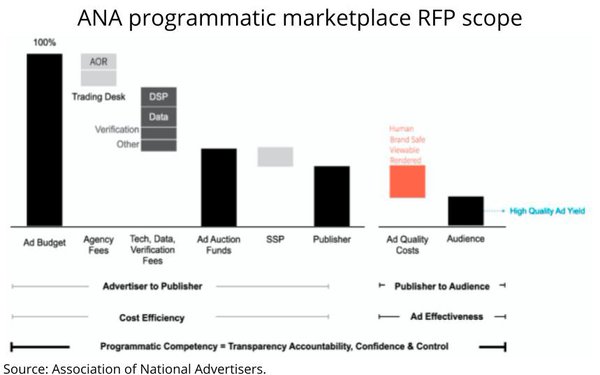 Asserting that the programmatic advertising marketplace is “riddled with material issues including thin transparency, fractured accountability, and mind-numbing complexity,” the Association of National Advertisers (ANA) this morning announced a request-for-proposal for a consultant to study and come up with recommendations for improving it.

The ANA estimates global programmatic ad spending is “on track to exceed $200 billion,” but that “only 40% to 60% of digital dollars invested by advertisers find their way to publishers” due to the so-called “ad tax” of ad-tech middlemen taking a variety of cuts that ostensibly enable or add value to programmatic advertising buys.

“Marketers do not have a fully transparent line of sight into their programmatic supply chains,” ANA CEO Bob Liodice said in a statement announcing the RFP, adding: “The lack of full transparency for ad delivery and ad quality is diminishing marketers’ ability to fully optimize investments and drive greater business growth. We believe this lack of transparency is costing advertisers billions of dollars in waste.”

The ANA said the project is being done with support from international counterparts, the Incorporated Society of British Advertisers and the World Federation of Advertisers, and that the explicit goals of the study are:

The RFP form can be downloaded here, and submissions are due by early June.

A shortlist of candidates will later be invited to make formal presentations, and the project will be assigned over the summer when fieldwork on the study will begin. No release of publication date was disclosed. 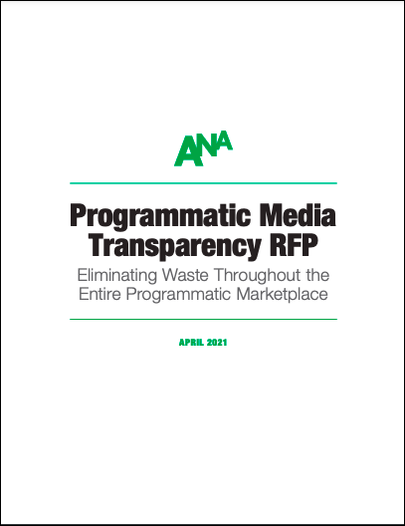