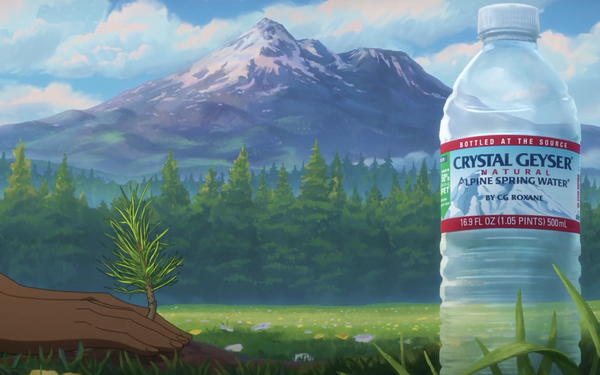 Aware that many Americans are skeptical of “green” claims from marketers, Crystal Geyser Alpine Spring Water is nurturing the seeds of brand credibility with a “1 Million Strong & Counting” campaign.

One million represents the number of trees that Crystal Geyser will have helped to plant by the end of 2021—the result of a 20-year partnership with the nonprofit American Forests.

“Our partnership is a natural fit because more than half of America’s drinking water originates in our forests,” American Forests CEO and president Jad Daley said in a news release.

Crystal Geyser’s campaign highlights the tree-planting initiative and the brand’s growing use of bottles made from rPET—recycled polyethylene terephthalate—which is made from previously used plastics that have been collected, sorted and cleaned.

In this animated video, the voiceover says that by purchasing Crystal Geyser water “you commit to a company” that is helping to plant 1 million trees along with an additional million over the next two decades.

Executives of the brand’s parent, privately held CG Roxane LLC, are depicted as characters in this spot in which quality control manager Kemi Oba tries to explain the “complex scientific process” by which used bottles become new ones.

The company’s San Bernadino recycling plant produces bottles made from a minimum of 50% rPET for use at its West Coast bottling plants.

“That’s where our core base is and where we’re doing the recycled plastics right now,” Fitzpatrick tells Marketing Daily.

CG Roxane released the results of an April survey of 2,000 consumers showing that 71% of respondents “believe that companies claim to be sustainable even when their actions aren’t.”

Moreover, just 26% of respondents said they were very likely to believe a company that uses words like “green” to describe their products.

Asked how people can verify Crystal Geyser’s claims, Fitzpatrick cites the work with American Forests, the brand’s use of recycled plastics and its cleanup work with the California Coastal Commission.

“It starts with our packaging and follows through with our website and social media. We’ve got a track record of doing things that’s pretty easy to find.”