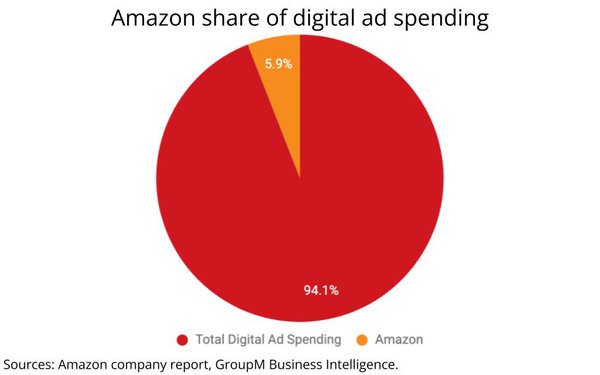 Amazon disclosed its annual advertising revenue for the first time on Thursday, when it reported Q4 2021 and full-year earnings.

“We’re excited to continue innovating in areas like sponsored ads, streaming video, and measurement,” Brian Olsavsky, Amazon finance chief, said during the company's earnings call with investors and analysts. “Of course, advertising only works so we make it useful for Amazon customers when we create great customer experiences, we deliver better outcomes for brands.”

Advertising remains a small part of the company’s business -- representing 7% of total revenue in Q4 2021, according to the company’s earnings statement. Advertising gives Amazon twice the revenue compared to its physical stores, and it is bigger than the company’s subscription services, which include Prime memberships.

Olsavsky said a lot of advertising is tied to Prime Day. While the ad business saw 33% growth rate in the fourth quarter, excluding foreign-exchange rates, it was much higher in Q2 2021 at 88%, and in Q1 2021 at 76%. The second quarter included Amazon Prime Day.

Amazon Web Services (AWS), which saw strong use in 2021, added more revenue year-over-year than any quarter in its history, and is now a $71 billion annual run rate business, up from $51 billion one year ago.

Amazon announced many AWS customers in 2021, including Best Buy, Meta, Nasdaq, Under Armour, Stellantis, Aurora, and many others.

The company noted inflation primarily from wage increases and incentives in its operations as well as higher pricing from third-party carriers supporting its fulfillment network. There was lost productivity and network disruptions from labor capacity constraints driven by a tight labor market and more recently the omicron variant.

Along with reporting revenue, Amazon said it would raise Prime membership annual fees.

This is the first time Amazon has raised the price of Prime since 2018.

Amazon also gave Q1 2022 guidance, reporting that net sales are estimated to reach between $112 billion and $117 billion, or to grow between 3% and 8% compared with first-quarter 2021.