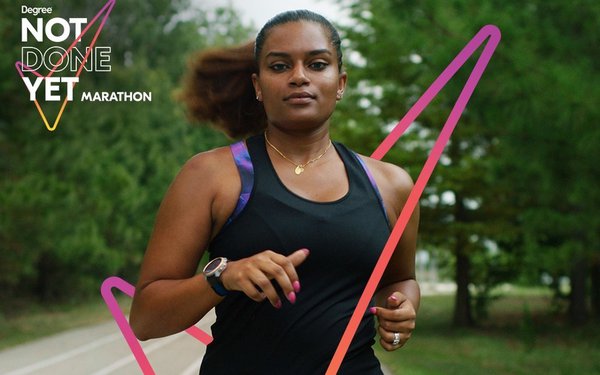 Self-doubt stinks. And it turns out to be a leading reason people fail to complete all 26.2 miles of their first marathon.

So Degree, the best-selling deodorant brand, wants to inspire many of those runners to get back in the game. Its #NotDoneYet campaign includes an inspirational trio suiting up for this week’s San Francisco Marathon.

“Degree as a brand is on a mission to inspire the confidence in everyone to move, breaking down barriers that get in their way,” says Kathryn Swallow, head of the deodorants category worldwide at Unilever and Rexona, known as Degree, Sure and Shield in various markets. “We wanted to find new ways to support those who face barriers to being active and who may experience self-doubt as a result,” she says.

In the case of the “Not Done Yet” marathon team, those barriers include multiple sclerosis, blindness and unexpected surgery. “Not being able to achieve a goal you set, like finishing a marathon, can impact self-confidence and the ability to achieve that goal later on,” she tells Marketing Daily via email.

One in five marathon runners fails to complete the course.

So the brand pulled together a team trainer, working closely with marathoner Tyler Cameron. “We are hoping to inspire the masses to show off their “Not Done Yet” attitudes,” Swallow says.

The team includes three everyday athletes: Sagirah Ahmed Norris, (pictured above), who has MS; Michael Zampella, who has degenerative eye disease; and Ashley Zirkle, who withdrew from her last marathon after donating a kidney.

Swallow says the brand chose the San Francisco Marathon, considered by many to be one of the most scenic courses, because of its emphasis on inclusivity. This year’s race, for instance, features California’s first ever non-binary+ division and an expanding disabilities division.

Degree is also an official sponsor of the race, so spectators can visit the Degree Tent and get samples.

Swallow says this year the race feels especially meaningful, given all the pandemic postponements. “After two years of events being canceled, this is a great moment for people to go out and meet the brands they know and love, learn about what we’ve been up to, and get inspired.”

The campaign also includes a social activation, urging others to share their #NotDoneYet stories, and triggering donations to Achilles International, a nonprofit that helps people with disabilities through athletic programs.