Chester Cheetah Leads Frito-Lay Into The Metaverse With Game Competition 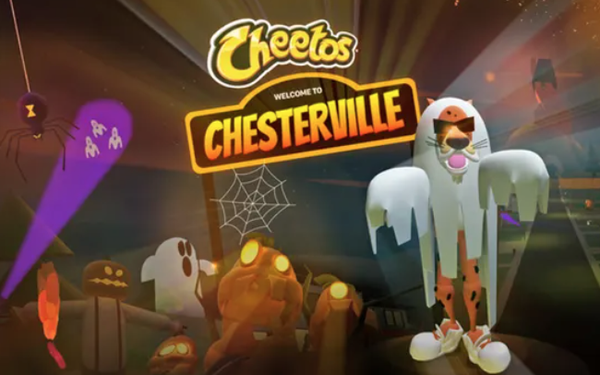 Snacks giant Frito-Lay has decided that Cheetos mascot Chester Cheetah should lead the company’s first foray into the metaverse.

Timed to coincide with Halloween, the campaign takes place in a digital neighborhood called Chesterville within the virtual reality platform Meta Horizon Worlds.

Players must conquer a series of tasks to gain access to a spooky mansion atop Cheetos Hill where they can vote for the temporary return of one of three Cheetos flavors.

Why Cheetos and not, say, Fritos?

“Cheetos is a brand that has consistently been at the forefront of culture. So it was kind of a natural for Cheetos to lead the charge,” Cheetos senior director of marketing Flavia Simoes tells Marketing Daily.

After donning a Meta Quest 2 virtual-reality headset, players are required to make mischief in Chesterville with the help of such Mischief Makers as Mac-O-Lanterns—with which they can smash and trap other players in blobs of Cheetos Mac ‘N Cheese.

“The more mischief they make, the more points they get on their mischief meter,” says Simoes.

“The higher the score on the mischief meter, the quicker they will unlock the gates to the spooky mansion, which is where they have a chance to vote.”

Cheetle Codes found on Cheetos digital platforms provide clues “that will point them toward specific actions that they can take to gain more points.”

Based on total votes entered, in 2023 Cheetos will bring back its Flamin’ Hot Chipotle Ranch, Flamin’ Hot Pepper Puffs or Nashville Hot flavor for a limited time.

Asked why the brand is rewarding players with voting rights instead of free snacks or merchandise, Simoes adds, “Cheetos fans are very passionate about their flavors. So we wanted to tie that very important aspect of the Cheetos experience to what they are doing in the virtual world.”

People without a Meta Quest 2 headset can cast votes for a returning flavor via a dedicated website until Nov. 2.

Agencies involved in the campaign include Vayner3, OMD and Ketchum.