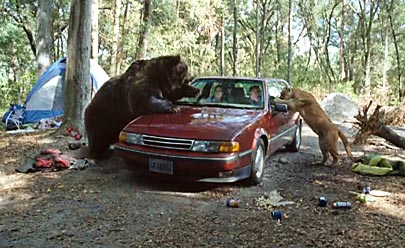 “To get our message out in a big way, we used humor and identifiable moments,” Berra said in a statement.

The campaign takes into account two vacation trends: Consumers’ desire for avoiding the hassles of air travel, as well as finding great value. Research shows that many Americans are curbing expenses by taking vacations that are within driving distance.

Carnival previously targeted cruise rookies with the "Didja Ever?" campaign earlier this year, said Roger Baldacci, Arnold Worldwide executive creative director.Given that everyone has had a “bad vacation” at some point in their lives, the campaign is definitely something that anyone can easily relate to and identify with.

"Cruise Rookies generally don’t consider cruising when planning a vacation," Baldacci tells Marketing Daily. "They tend to have exaggerated misperceptions  -- 'I’ll get sick, I’ll be trapped for a week at sea, it’s not for someone like me, etc.'  Our message has to be direct and relatable to help readily combat those misperceptions. "

The media buy includes national and regional executions across TV, outdoor (billboards) and online media. Online videos, digital display and out-of-home (OOH) work round out the campaign. One example is a 3D billboard in Times Square that will portray the beauty of a Carnival cruise ship on the Caribbean Sea juxtaposed against the bustle of the city, with the phrase “Cruising From New York.”

Other customized OOH elements will be featured in subway cars, atop taxi cabs, on elevators and in prospecting displays.

The first TV spot of the multichannel campaign, which launches Dec. 26, shows a couple reflecting on the bad choice they made for last year’s vacation (which resulted in wildlife attacking their car -- not exactly the relaxing trip they were hoping for).

The “Land vs. Sea” campaign was created by Boston-based advertising agency Arnold Worldwide. The premise is pitting the “carefree fun” of a Carnival cruise against the most common land-based vacations such as visiting relatives, camping and going to an amusement park.

“Consumers may be cutting back in some areas, but vacations are still as important as ever and are an integral part of how we recharge and reconnect with friends and family,” said Roger Baldacci, EVP, executive creative director, Arnold Worldwide. “We wanted to convey the message that a Carnival cruise is not only easy and within their reach, but is a much better option than a land-based vacation.”