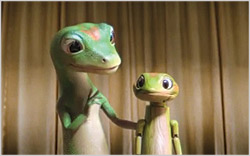 GEICO Corp. topped all property and casualty writers in terms of advertising dollars spent in 2011, according to SNL Financial.

The direct insurer spent just under $1 billion in 2011 on TV, radio, billboards and Internet banners across the country.

SNL gathers data reported for advertising by all P&C subsidiaries and aggregates this data for all companies with a common ultimate parent.

In 2011, GEICO was behind one out of every six dollars spent on advertising in the P&C industry. While GEICO grew its advertising dollars by 10.1% in 2011, that was actually below the industry growth rate of 14.9%.

The next three largest advertisers, State Farm Mutual Automobile Insurance Co., Allstate Corp. and Farmers Insurance Group of Cos., all increased spending on advertising year-over-year in 2011 by a larger percentage than GEICO.

Of these three companies, Farmers was the most aggressive, increasing its advertising spending by 43.9%. In addition to the television campaign featuring actor J.K. Simmons, Farmers also purchased the naming rights to Farmers Field in Los Angeles for $700 million, payable over 30 years.

USAA Insurance Group increased its advertising by 42.4% in 2011. The company, which markets and writes exclusively to military veterans and their families, has previously forgone direct advertising to consumers.

While most companies are increasing their advertising budgets, GEICO is still the most reliant upon advertising. GEICO's ad spend as a percentage of its personal premium is the highest among the top advertisers at 6.5%. Over the past five years, GEICO's level of advertising compared to its premiums has remained relatively constant, usually hovering near the 6.5% mark. The only exception was in 2009, when advertising slid slightly to 6.2% of premiums.

GEICO has been able to leverage advertising into a competitive advantage. It is consistently among the industry leaders in terms of premium growth and among the top-performing auto insurers, according to SNL.

Allstate is also looking to learn from GEICO's success. Looking to make inroads into the direct market, Allstate purchased Esurance Insurance Co. in 2011. Starting in December, Allstate began an aggressive re-branding of Esurance that included a television and radio ad campaign featuring actor John Krasinski of "The Office" and the Grammy Award-winning song "Jam Man" from guitarist Chet Atkins.