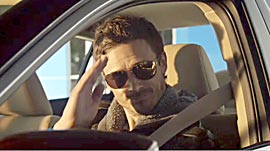 Honda is back to summer antics with another humorous inventory clearance campaign leading up to the automaker's traditional fourth-quarter portfolio recharge. The campaign, which launches this week, uses Hollywood movies and popular songs to evoke that just-bought new-vehicle feeling.

The effort, by Santa Monica, Calif.-based RPA -- which has been Honda’s AOR since before "When Sally Met Harry" --comprises six spots that parody clichés about Hollywood endings: there's one that makes fun of action-adventure, and others that make hay of the family comedy, the buddy film, and other genres. In each case, there's a farewell from a salesperson, with an instantly recognizable song rolling up, as the driver rolls off the lot and into the sunset, credits rolling.

The action/adventure spot is set to Judas Priest’s “You’ve Got Another Thing Coming”; the family comedy spoof is set to Pete Townshend’s “Let My Love Open the Door.” That one touts the Odyssey minivan and features someone with three kids looking for the right vehicle. There's also one set to Cyndi Lauper’s “Girls Just Want to Have Fun,” Derek and the Dominos’ “Layla,” and OneRepublic’s “Good Life.”

“In this campaign, we directly address six key demographics with executions that are colorful and big like Hollywood blockbusters. Breaking through was a priority because of the clutter in the marketplace,” said RPA ACD/Copy Sarah May Bates at RPA.

The ads will run on shows like “America’s Got Talent,” “Castle,” “NCIS,” “The Middle,” “The Office,” “Two Broke Girls,” “Vampire Diaries” and cable networks, including A&E, Animal Planet, Bravo, Discovery and TBS. Print ads will be featured in pubs like People,Sports Illustrated, Time and USA Today.

And what summer campaign would be complete without a sweepstakes? Starting this week at ShopHonda.com consumers can enter for a chance to win free gas for a year or be awarded instant-win $100 American Express gas card prizes.