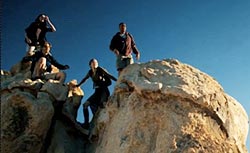 TV breaks July 27 during NBC’s broadcast of the opening ceremony of the 2012 London Summer Olympics. The tagline is “Join the Nation.”

“For this campaign, when we were considering how best to deliver our message, we were looking for a familiar voice that would bring our brand character to life,” Hanley tells Marketing Daily. "Julia’s voice brings an authentic, inspired tone to the campaign that resonates well with our target audience.”

The Olympics are predicted to be one of the Top 10 television events of the year, making it an efficient, high-profile buy and a smart advertising investment, Hanley says.

Developed in partnership with Durham, North Carolina.-based ad agency McKinney, the effort includes TV, radio, digital and print advertising. The creative highlights Nationwide’s mutual structure -- which has allowed the company to put members first, not shareholders, since it was founded in 1926.

“Anthem,” a 30- and 60-second spot, celebrates the lives of Nationwide members and all that being part of this special member community has to offer. The second ad, “Disappear,” focuses on Nationwide’s Vanishing Deductible product, an option for members that rewards them for safe driving. It will begin running in August.

“We plan to create additional ads that focus on our brand, as well as our product offerings,” Hanley says. “The launch ads will run in varied rotation throughout summer until new messages are rotated in.”

The campaign also includes a dedicated campaign Web site, www.jointhenation.com, which will provide ongoing, protection-oriented content that encourages participation from members and other key audiences.

Nationwide employees will help kick off the campaign during the weekend of July 27-29 at the NASCAR Nationwide Series Indy 250 at the Indianapolis Motor Speedway and the Web.com Tour’s Nationwide Children’s Hospital Invitational golf tournament in Columbus.