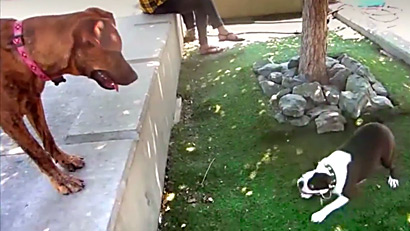 Purina Pro Plan dog food debuted a consumer-generated TV spot during one of the world’s most famous dog shows. Viewers who tuned in Feb. 11 and 12 to the 137th Westminster Kennel Club Dog Show got the chance to see "everyday" dogs prove their greatness alongside the elite "Best in Show" class.

Purina Pro Plan, the presenting partner of the prestigious annual dog show, debuted the 60-second spot "How I'm Great," a compilation of consumer-submitted videos celebrating every dog's greatness, during the live broadcast on Feb. 11. The spot ran again on Tuesday’s show.

“Viewers can celebrate the finest purebred conformation dogs together with the great dogs we have at home,” she said. “We think the public will be inspired by the dogs featured in the ad as much as we were."

Purina Pro Plan conducted a video contest during the summer of 2012 on its YouTube page, asking participants, "How is Your Dog Great?" to show their dog's journey to greatness and inspire others to want to discover greatness in their dog.

The promotion garnered so many submissions -- more than 500 videos -- that Purina Pro Plan decided to create the entire ad spot using clips collected throughout the contest. Users also voted for their favorite clip out of eight finalists, ultimately choosing the video of a Chicago rescue dog named Noodles, whose family was recognized at the Westminster Kennel Club Dog Show.

The ad debut comes on the heels of the brand's January launch of a mobile app, Purina Pro Plan P5. Purina calls the app the “next generation” of dog training technology. Available for free via the Apple App store, it offers owners of all dog breeds and sizes personal plans and video lessons in agility, dock diving, flying disc, obedience, running and strength training.

The app is part of the Purina Pro Plan SPORT product portfolio launch, which offers three formulas to fuel athletic dogs based on activity level -- from everyday exercise to competitive performance.

The "How I'm Great" spot is a build off of the brand's 2012 debut anthem spot, "Good to Great," which also featured clips of everyday dogs being great in the eyes of their owners. Both spots are set to original song tracks by Chicago-based rock musician, Tony Rogers, and are available for download. Both ads were created by Leo Burnett Chicago.

Fans can visit Purina Pro Plan's YouTube page to view both ads, meet the dogs featured in the commercial and watch Noodles' winning video contest submission. During the show fans can also share with other dog lovers via Twitter what makes their dog great, using the hashtag #greatdog.