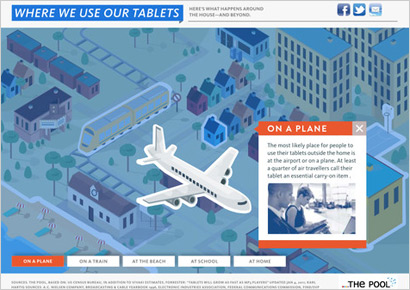 VivaKi’s Nerve Center in August 2011 announced a new “lane" focused on tablets as part of its broader Pool initiative to develop new digital ad formats. The results, unveiled on Wednesday, are a trio of interactive ad units that it hopes both publishers and advertisers will use as standards for tablets.

The new formats include a banner-to-full-screen rich media ad, pre-roll with overlay and a rich media interstitial unit. The new ad models were released, along with research findings, infographics and best practices in the form of a stand-alone app for the iPad and Android tablets called “The Pool: The Tablet Lane.”

“When I step back and look at the research, one of the things that really blows me away is that one in four Americans now have a tablet,” said Tracey Scheppach, VivaKi EVP, innovations director and founder of the Pool. “The metrics of ad favorability and recall and what consumers are looking for from advertising make this an incredibly powerful platform.”

As VivaKi’s largest lane to date, the effort involved 26,000 hours spent with industry peers and 871,000 hours with more than 20 million consumers through field trials and other research.

Among the advertisers involved were Bank of America, Best Buy, The Coca-Cola Company, General Mills and Procter & Gamble. Among companies on the publishing side were ABC Television Network, Bonnier, Scripps Network Interactive, USA Today and The Weather Company. Also taking part were research firms including InsightExpress and ad-serving partner Medialets.

The new ad formats are aimed at taking full advantage of tablet features and screens to drive engagement.

In that vein, the banner that expands to a full-page unit is designed mainly for the Web or more utility-focused apps. VivaKi advises the ad should be animated to make it stand out and use tablet-friendly terms like “tap,” “swipe,” and “pinch” to expand or interact with the unit. Video, games and product information proved effective after ad expansion.

For the pre-roll unit, the firm recommends that it auto-play and feature a large, persistent call-to-action. Any overlay graphic around or on the media player should animate after a few seconds to make interactive options more noticeable.

VivaKi suggests that the third unit -- the rich media interstitial -- works best with written content when a user may find large videos too disruptive. Branding should be clear to increase recall.

“Everything that we do in the Tablet Lane is about engagement. That’s what I really want our partners to see: When you are in front of a consumer and you get to have full-screen engagement with them on a one-to-one basis,” said Craig Etheridge, senior vice president, mobile and digital ad sales, in USA Today, in connection with the VivaKi announcement.

What gives Scheppach particular confidence about tablets as an emerging media is the rate at which adoption has occurred. She pointed to one chart released today showing that tablets are taking off much faster than other media including TV, radio, PC, and the Internet. By 2015, tablet penetration in the U.S. is expected to be approaching 50%.

Separately, eMarketer on Wednesday released a new report estimating U.S. mobile advertising -- including advertising on tablets -- jumped 178% in 2012 to $4.1 billion. That total is projected to grow 77% this year to 7.29 billion, and to reach more than $27 billion by 2017.

“So the rate of change at which the advertising industry needs to embrace [tablets] is just accelerating,” said Scheppach. “But what is needed is a lot of standardization so the money can move quickly."

Most recently, The Pool introduced three new online video ad formats in February in conjunction with AOL. VivaKi previously developed Ad Selector units, which give consumers control by enabling them to pick which pre-roll video ads they see.