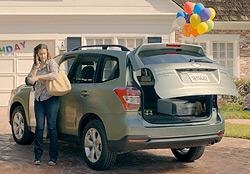 Subaru is the fastest-growing auto brand in the U.S. Why? Love. Yes, it’s the brand’s tag line, but Subaru does have huge brand loyalty, strong equity, desirable product, and a good ad agency in Minneapolis-based Carmichael Lynch.

Dean Evans, SVP and CMO of the Japanese automaker’s Cherry Ridge, N.J.-based U.S. sales arm, said the company has had success in adhering to the brand’s essence by staying true to its four core operating values: adventure, safety, versatility and longevity. "We are good story tellers around these four pillars,” he said during a presentation at Automotive News’ marketing seminar this week in New York. “We are the original emotional car brand...you can't just sell the car, or just the brand, but also the emotional experience."

Subaru, for example, touts its vehicles as pet-friendly, and has a program in which it donates a portion of each sale to a charity by the buyer from a short list.

At the seminar, Evans offered another example: he screened a forthcoming ad focused on safety that is both risky and emotional. The spot shows a completely totaled Subaru, an image that is pretty much taboo in auto ads. A cop at the scene of the accident remarks to another, in amazement, "They lived." From that point on, everyone involved in moving the remains of the car to the junk yard gapes at the car and says the same thing, "They lived." Finally, cut to the family in their new Subaru, with Dad also commenting on their survival.

Evans says the company's media mix is 25% digital, 25% "other" (experiments from the prior year that worked and now are part of the media allocation), and 50% TV. He said the online-video slice of the media will grow to be 20% to 40% of the pie.

That includes socially derived video, with which the current campaign for the new Forrester is infused. One ad focuses on the larger back seat, with a parent keeping tabs on her kids. That's integrated with a  consumer-generated play, where people can upload videos of what their kids do in the back seats of their Subarus.

Evans says the company does market research monthly, checking "brand health" on awareness, familiarity, favorable opinion and purchase intention. "The great news is those numbers are all up this year; awareness is at an all-time high in spite of us not having spent top marketing dollars. We have been optimizing our message."

The brand's conquest rate stands at 58%, per Evans, with loyalty rates surpassed only by Ford. "What really matters is not just how many [consumers] you sell to but how many you keep." He said the BRZ, a sports coupe, is the top conquest vehicle in the brand's lineup, with strong numbers as well for the the heart of the market: midsize cars and compact SUVs.