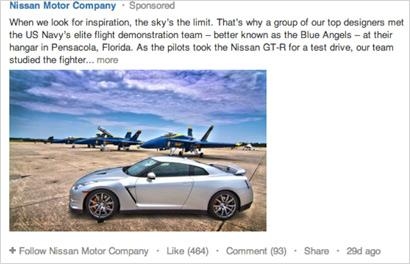 A new analyst report forecasts that LinkedIn’s recently launched native ad unit will boost the professional networking site’s ad revenue by $46 million in 2014. Of that total, $18 million will come from the mobile side, according to the report by Tom White of Macquarie Capital.

Formally launched in late July, LinkedIn’s Sponsored Updates run in the newsfeeds on users’ home pages and mimic the format of organic posts but are labeled as “sponsored.” The ads give people the option to “Like,” comment on, and share the ads, as well as “Follow” the advertised company.

Nissan, Xerox and Adobe were among the brands testing the new ads prior to their wider rollout in midsummer. Based on advertisers' feedback and other checks, Macquarie said it is “incrementally optimistic” about marketer adoption of Sponsored Updates, although LinkedIn so far is limiting available inventory to gauge user reaction.

About one-third of the LinkedIn’s traffic is now coming through its mobile apps. “We view LinkedIn as one of only a handful of consumer Internet companies best-positioned for the expected growth in “native” ads,” wrote White. His forecast of $46 million in revenue generated by Sponsored Updates next year is partly based on Facebook’s rapid ramping of mobile ad sales over the last year.

White suggested that the release of advertiser APIs (application programming interfaces) in the fourth quarter could help to drive more demand on the platform. LinkedIn CEO Jeff Weiner said during the company’s second-quarter earnings call that creating a set of APIs to help agencies create campaigns using Sponsored Updates was a “high priority.”

Following the example of other social media properties like Facebook and Twitter, LinkedIn is keen to monetize growing user interaction in the newsfeed. Macquarie estimates that engagement with the newsfeed by LinkedIn users more than doubled in the second quarter and accounts for about a quarter of total interaction on the site.

By 2015, Macquarie estimates that figure could more than triple to $132 million, with $55 million coming from the newsfeed ads in mobile. The investment firm also raised its revenue projection in 2014 and 2015 for LinkedIn by about 1% and 3%, respectively.

In the latest quarter, LinkedIn reported revenue of $363.7 million, with advertising sales contributing $85.6 million, or 24% of the total. Advertising growth is expected to continue at a slower pace this year as the company transitions from more traditional display units and customized ad offerings to Sponsored Updates.