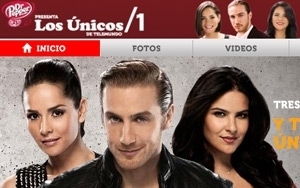 Deutsch L.A. is the creative agency that conceived and developed the campaign’s English and Spanish versions for Dr Pepper.

“We discussed with Dr Pepper their campaign and goals that they wanted to translate to the Hispanic audience,” says Christine Escribano, senior vice president of Integrated Marketing Solutions, Telemundo Media. "We then recommended who we thought best encompassed the one-of-a-kind qualities the brand wanted to capture. They also wanted someone well-known in telenovelas, someone popular in social media and a multifaceted performer. It was also important that they be relevant and in upcoming shows."

This campaign is integrated and multifaceted, but everything revolves around the Los Unicos dedicated custom digital hub. Each of the three stars will be showcased in their own six-part Web series featured on the digital hub, which also includes custom co-branded banners, photo galleries and the ‘Rank It’ tool that lets fans comment on this campaign.

The three stars will also promote their stories on their own social media sites and across Telemundo’s social-media pages.

This campaign receives support via on-air promotion during Telemundo’s “Un Nuevo Dia” morning show and its “Titulares y Mas” sports series, as well as through cross-promotional segments on Telemundo's sister cable network mun2's “Reventón” and “mun2 Pop.” Dr Pepper will be integrated in Telemundo’s prime time “Reina de Corazones” series, which, in turn, will be supported by tune-in messages.

The multiplatform campaign includes a 2014 Dr Pepper and Telemundo co-branded calendar featuring 12 Telemundo superstars. The calendar will be distributed by Dr Pepper as a gift, with purchase of Dr Pepper products and supported by local appearances from Telemundo talent in key markets.

It took teamwork to develop this campaign, says Escribano. "It was not as if they [Dr Pepper] gave us a short brief and then we gave them some ideas. It was a dialogue, and we encourage that for all of our partnerships."