Mobile advertising shows no signs of sluggishness. Global mobile traffic has grown 45.5% quarter-over-quarter between Q3 2013 and Q1 2014, and ad spend has increased 62% over the same span.

The data comes from AppFlood, a mobile real-time bidding (RTB) network from China, and its “State of Global Mobile Advertising" report, featuring data from Q1.

Interstitial ad units accounted for the bulk (70%) of mobile revenue in Q1 2014, but its share of the pie decreased 14% month-over-month during the first three months of the year. Interstitial ads have made way for rich media units, which grew 34% month-over-month during Q1 2014 while accounting for 11% of all mobile revenue. Banner ads hovered at about 1%, while “Other” formats made up 18% of revenue during Q1. 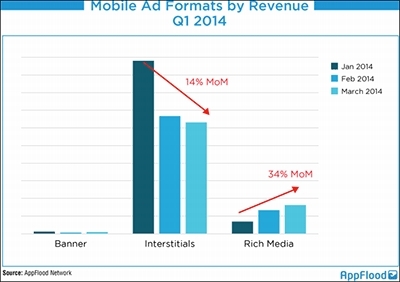 Overseas markets are growing in terms of traffic -- particularly Asia and the Middle East, which accounted for 27% and 23% of all mobile traffic in Q1, respectively -- but all markets trail North America when it comes to install rates.