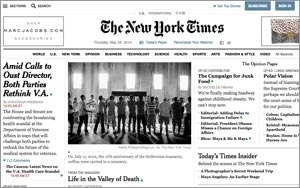 The New York Times produces more than 300 URLs daily, but media companies like Huffington Post and BuzzFeed have, in just a few years, eclipsed online traffic of The New York Times by building best practices for search and social into their workflow, while other media organizations have broken down the barriers between newsrooms and business to support readers, per the New York Times Innovation report. Long live -- but now obsolete in digital media -- the metaphors "The Wall" and "Church and State." "Increased collaboration, done right, does not present any threat to our values of journalistic independence," per the authors of the report.

The report emerged last week and continues to make headlines. The report states that the Times needs to focus more on the behind-the-scenes processes of optimization. The Times is reaching 6.5 million readers by email, even though it's treated like an afterthought.

Kudos to Jack Allen for identifying what search strategists overlooked at The New York Times, but there are other insights that marketers should recognize. Even more interesting to me, the report suggests a connection between search and social media. For instance, a story at the Huffington Post cannot be published unless it has a photo, a search headline, a tweet and a Facebook post, per the report.

News organizations and editors cannot work autonomously in online media. For the first time in the Times' history the newsroom and business side now focus nearly primarily on readers, per the report. I'm not suggesting the two collaborate on stories, but editors need to be made aware of certain optimization principles and how readers find information on the publisher sites.

The siloed organizational structure of the New York Times Twitter account run by the newsroom and the Facebook account run by the business side produce disjointed processes. This provides one example of a bygone era. The report goes as far as suggesting that this disjointed approach results in a subpar collection of data, far less than other competing newsrooms. The Times remains remiss at pairing social editors and data experts.

The siloed organizational structure creates data silos. News and business need to build tighter bonds. At the very least, the two divisions need to know what the other does to support readers. The authors explain "a large and vital advertising arm that should remain walled off," but the media site's business side developments and roles focused on readers -- which it refers to as "reader experiences" -- need to work more closely with the newsroom. The report suggests that the reader experience should belong to the newsroom to more closely collaborate, communicate and develop cross-department career paths.