Comparing Madison Avenue's current network TV advertising currency to the equivalent of scoring a baseball game after the fifth inning, CBS Wednesday said it will begin stretching the ratings it reports publicly to the press and the rest of the industry by several days, releasing so-called "L7" ratings alongside the "live plus same day" Nielsen ratings it currently distributes as part of its preliminary ratings to the media.

This comes just before the official start of the upcoming TV season on Sept. 22, and follows an upfront advertising sales season in which CBS and other networks touted a shift toward so-called "C7" ratings from "C3," which has been Madison Avenue's standard network TV ratings currency for years.

“L7 and C7 are the metrics that more accurately account for how viewers watch our shows and how we get paid for our programming -- both in advertising and content licensing,” stated Leslie Moonves, president/chief executive officer, CBS Corp.

He added: “C7 deals were a significant part of our upfront negotiations this year, and we are doing more and more C7 deals all of the time.”

Utilizing a baseball scoring analogy, CBS' Chief Research Officer David Poltrack said: “To report audience results for programs the day after they air live is comparable to reporting the results of a baseball game after the fifth inning."

As part of its announcement, CBS released data showing that a show such as "Person of Interest" may generate as much as a 38% audience boost via C7 ratings (see data below).

CBS, however, did not disclose whether it will release of C3 or C7 projection and/or ratings. C3 and C7 ratings are the commercial ratings plus three and seven days of time-shifted viewing, respectively. C3 is still the primarily metric in which advertisers pay national TV networks.

CBS said it will release daily L7 projections for total viewers -- adults 18-49 and adults 25-54 -- that will include percentage increases over each program’s live-plus-same-day averages.

Networks have been pushing TV business publications that report on daily TV ratings -- primarily in the form of Nielsen-live-plus-same-day ratings -- to consider a broader picture of a TV show's performance, including a majority of time-shifted viewing, up to seven days, as well as other digital platform exposures. 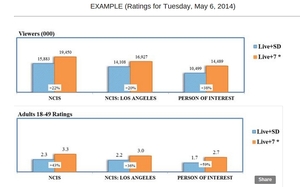