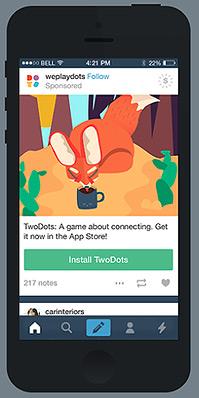 With the new Tumblr Sponsored Apps service, if users click on the install app button in the sponsored post, it will direct them to Apple’s App Store or Android’s Play Store — depending on their mobile operating system — to download.

If a user already has the app installed, it will say “Open” instead.

The pilot program is launching with a number of gaming and app marketers, including League of War, Knights & Dragons, Big Fish and Betaworks.

Making the new unit a no-brainer for Tumblr, 65% of users already access the social network’s content through their mobile devices, and rack up an average of seven mobile sessions per day. Total mobile engagement is up 85%, year-over-year, according to internal figures.

Despite Tumblr’s big plan to bring in over $100 million in ad revenue next year, not everyone sees a bright future for the social network. Research firm L2 recently ranked Yahoo’s decision to buy Tumblr for about $1 billion as the worst tech acquisition of the past five years.

The harsh indictment was based on what L2 believes to be declining interest from Tumblr’s brand partners. The firm, founded by Scott Galloway, a professor of marketing at NYU Stern, found that 24 brands have ditched Tumblr over the past year.

Tumblr declined to comment on L2’s recent report, but a source close to the Yahoo unit said the findings were completely unfounded.

For sure, many top brands continue to work closely with Tumblr. Tumblr recently debuted its in-stream auto-play video ads with several launch partners, including Hulu, JCPenney, Lexus, Unilever’s Axe brand of products, and Universal. Another brand partner, The CW, is using the new format to promote several series, including “The Flash” and “Jane the Virgin.”

Since dropping about $1 billion on Tumblr last year, Yahoo has made a number of efforts to begin monetizing the social network. Most recently, Yahoo announced the launch of a new content marketing solution built specifically for Tumblr.
apps, brand marketing, mobile, search, social media, yahoo
Next story loading