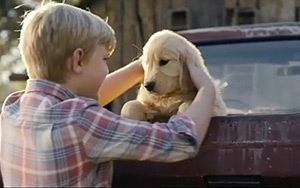 Many Super Bowl ads will undoubtedly feature trite superficial stories to tug on viewers' heartstrings. First Bank, however, saw an opportunity in doing the opposite with two regional TV spots to promote the bank’s new Person to Person (P2P) Transfers, which allow secure funds transfers to any domestic bank account, using only their email address or mobile phone number and name.

Developed by ad agency TDA_Boulder, the first spot opens over an American heartland soundtrack, where a dad and son fix up a dusty country store. The son’s attention is across the street, where a pickup has puppies for sale. Chores done, dad tousles boy’s hair, and boy runs to pick out his new best friend. However, there are problems. Dad finds his wallet empty, goes to the ATM for cash, and in just that time, the last pup is sold. As the boy fights off tears, superimposed type reads, “Don’t let ATMs slow you down,” and the narrator announces, “Introducing Person to Person Transfers. Pay anyone, anywhere, from your phone.” The spot can be seen here.

Then later in the evening, a follow-up spot shows the boy, now looking straight at the camera, saying, “Hi. I’m Charlie. I appreciate your concern for me not getting this puppy... Truth is, I’m an actor” (9-year-old Charlie Greenleaf). “That wasn’t my real dad, and this isn’t a real town. And this dog…I never wanted him.” (Hands pup off-screen.) “I’m more of a cat person. So thank you for caring. But hopefully we all learned a valuable lesson. Person to Person transfers are faster than going to the ATM. And commercials aren’t real.” See that spot here.

Ultimately, the concept uses a construct that people are familiar with -- heartland, cute boy loves adorable puppy -- and then rips the rug out from them to create a memorable ending. "The response video with Charlie was a fun opportunity," says Jeremy Seibold, creative director, TDA_Boulder. "We want people to laugh, but we knew that the ending would ruffle a few feathers. Our hope was Charlie could help alleviate that. He’s adorable, and like he says, just an actor."

The first spot airs in the third quarter across Colorado, and pre-game in Arizona, and on paid Facebook via Kinetic Social and mobile via AdTheorent and Verve. The second spot airs Super Bowl night on Jimmy Fallon in Colorado, and on NBCNFLNews Special in Arizona. Also, the ads will run across all FirstBank-owned social channels, including Facebook, Twitter, YouTube, Instagram, Google+.

“Person to Person Transfers is still a relatively unknown product," says Seibold. "We needed to create a commercial that could explain when and how they’re useful to you -- but do it in an entertaining enough way that is worthy of the Super Bowl.”

FirstBank is a division of FirstBank Holding Company, Lakewood, Colo., privately held and majority owned by its management and employees. It is Colorado’s largest locally owned bank, with additional locations in California and Arizona. The bank is also promoting its services during the Super Bowl via out-of-home media.
advertising, banks, super bowl
Next story loading