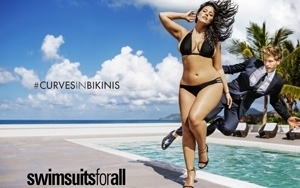 This year, the brand is hoping for some more buzz by becoming the first brand to feature a plus-sized model in the pages of the annual print magazine.

"We wanted to take the buzz from last year to the main stage," says Moshe Laniado, CEO and President of SwimsuitsForAll. "Actually being in Sports Illustrated and making that cultural statement now, not only felt like a business opportunity, but an important step we could take for the women we represent.”

Developed by agency KraftWorks NYC, the print ad — appearing on newsstands on February 9, 2015 — features model Ashley Graham in a string bikini from SwimsuitsForAll's Swim Sexy line, while an awe-struck attractive man gawks at her body. "We’re a small business, but we took a risk and put most of our eggs in the big Sports Illustrated basket with the hope it would pay off in coverage," says Laniado. "We think it paid off."

Importantly, this concept is designed to be high-fashion to position the company as a fashion label rather than an online retailer.

KraftWorks is owned and operated by Neil Kraft, the former Calvin Klein creative director who helped develop the iconic Marky Mark campaign. The ad was shot by noted photographer Russell James. "Last year was all created internally," says Laniado. "This year, we wanted to take it up a notch given the press investment and coverage we were hoping for. KraftWorks are the experts in creating iconic imagery; we knew they would deliver."

The SI print ad launches a multifaceted Curvy Girl Era campaign anchored by the hashtag #CurvesInBikinis that encourages women to submit their own photos and offer their support for curvy bodies. “Tastes and body types change over time, and curves have never been more ‘in.’ There is no better way to celebrate and show off than by donning a bikini. When the #CurvesinBikinis ad in Sports Illustrated is released, the world will be watching and they’ll like what they see,” says Laniado.

The campaign then runs across social media channels and images from the campaign will run throughout the season in various media.

KraftWorks has represented the brand since October 2014.