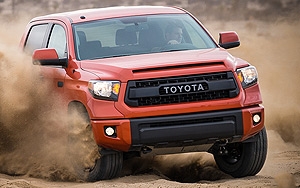 The most recent native video program, published on Motor Trend’s Web site and YouTube channel as part of its "Dirt Every Day" series, highlights the capabilities of the new Toyota Tundra TRD Pro.

The situations included driving up canyon in a shallow streambed in New Mexico and descending the “Hell’s Revenge” trail in Moab, Utah.

In good online video fashion, there’s also a bit of unexpected whimsy on the way -- including a brief, unexplained cameo by what appears to be a bright pink Sasquatch in the woods of Oregon.

At the time of writing the Toyota Tundra TRD Pro episode, "Dirt Every Day" had generated almost half a million views on Motor Trend’s YouTube channel and received 1,452, while positive (thumbs up) reactions outnumbered negative by a margin of 7,784 to 274.

The video was also shared on Facebook and Twitter as well as several independent Toyota truck enthusiast sites.

TEN CEO Scott Dickey noted that unlike other types of branded content and native ad formats, auto enthusiasts have to seek out the Motor Trend channel and choose to watch the sponsored content: “They know it’s sponsored by Toyota and the consumers are interested in learning about it… It’s not just shoved into a digital feed somewhere, because the YouTube channel is a destination.”

Dickey added: “This is really where our business going.  How do we create great content that the consumer is excited to engage with, and give our customers a chance to tout their products? That’s the great thing about being in enthusiast media.”