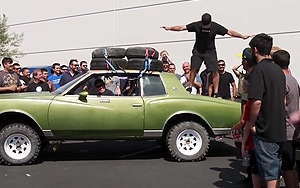 The Enthusiast Network has scored big with Roadkill, an online video series that built an audience numbering in the millions with its engaging depiction of iconic, custom-built cars and their drivers being mistreated in adventurous ways.

Now TEN is building on the brand’s momentum with millennial males with the launch of a new eponymous print magazine, an event series and a dedicated Roadkill Web site.

The new Roadkill magazine will debut as a large format, premium quarterly with a cover price of $9.99, hitting newsstands in September; the subscription price has yet to be determined.

The title could move to a monthly publication schedule if it gets the same traction as the video series that spawned it, according to TEN CEO Scott Dickey.

For example, the first issue includes a story about the experience of driving a half-million-dollar, six-wheeled Mercedes all-terrain SUV in the environments for which it is designed, and another about what happens when a main battle tank meets a fleet of civilian automobiles.

The magazine is just one part of a larger expansion of the Roadkill footprint, which also includes new event series.  One of the new event series, Roadkill Nights, is a “pop-up car festival” that will give car enthusiasts a chance to see and participate in some extreme automotive events. For the first Roadkill Nights event, TEN is taking over the Pontiac Silverdome in Michigan to host a drag race with 200 custom cars created by fans.

The multiplatform Roadkill brand expansion is being sponsored by Dodge as a launch partner, with a number of placements highlighting the latest models of American muscle cars including the Challenger and Viper.