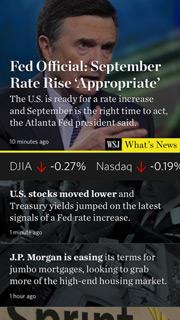 TheWall Street Journal has launched a new mobile-only app for the iPhone, “What’s News,” providing a digital version of the news-at-a-glance feature from the front page of the print newspaper. The app is only available to WSJ subscribers, who receive it as a free additional product.

The “What’s News” app rounds up the ten most important stories throughout the day, written by a dedicated team of journalists in New York City, Hong Kong and London, and also features real-time reporting on major market data.

While the app was surely in the works for some time, its debut couldn’t be better timed -- coming as it does amid historic turmoil in global markets.

In April, WSJ unveiled a redesigned Web site that is consistent across different devices, complementing its recently relaunched Android app. It also launched a new app for Apple Watch.

The WSJ’s move to create a mobile digest version for readers on the go comes not long after The New York Times revamped its own mobile digest app, NYT Now, scrapping a subscription plan and reinventing the app as a free, ad-supported service.