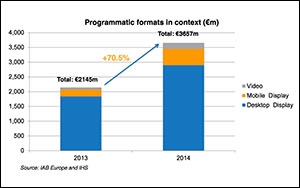 The IAB Europe also looked under the “programmatic” hood at the different channels -- namely mobile and video. The report, which was shared at dmexco 2015 on Wednesday morning, noted that mobile was a key growth driver in programmatic, jumping 240%, to €552 million, in 2014 (up from €230 million in 2013).

However, both mobile and video still pale in comparison to the size of the programmatic display market in Europe, which the IAB valued at €2.9 billion last year. It was valued at €1.8 billion in 2013.

IAB Europe teamed with IHS to conduct the research.

Western Europe accounts for the vast majority of the programmatic ad spend in Europe -- the region represented roughly €3.4 billion of the €3.65 billion pie -- but report notes that “Central and Eastern Europe surge[d].”

Per the report, programmatic spend in Central and Eastern Europe more than doubled from 2013 to 2014, as the region saw a 112.6% jump.