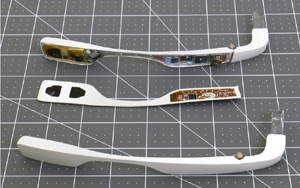 Photos of a new version of the Google Glass head-mounted wearable device have appeared in a filing on the Federal Communications Commission Web site showing new features such as charging port, foldable arms, and larger glass prism that acts as a screen.

A statement on the company’s letterhead authorizing a third party to help Google through the process, along with a quick-start user manual similar to the original Google Glass documentation, are in the packet of filings.

The instructions detail how to turn on the device, as well as information about the display, camera, and touchpad that can be used to navigate different cards.

The filing, which names the model GG1 in the PCC documents, also includes several radio frequency exposure compliance reports. After all, the RF chip embedded in the device sits on the side of the human head.

Google announced in January that Google Glass was “graduating” from the tech giant’s secretive lab for developing new technologies and would be spun off as its own entity within the company. As part of the transition, it stopped selling the wearable.

At the time that Google spun out Glass it did not reveal future plans, but reports emerged months later the technology would focus more on business, similar to the Epson Movario.
google, iot, mobile, search, search marketing, technology, wearable technology
Next story loading