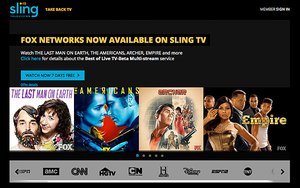 Sling TV is launching a new multistream service for $20 per month in a beta test that includes many Fox Networks Group channels.The multistream service gives consumers the ability to stream on up to three devices simultaneously in or outside the home.

New Sling TV customers can trial the multistream service free for seven days and with no annual contract.

Sling TV's existing single-stream service -- which launched in the first quarter of 2015 -- includes content from Disney and ESPN Networks, but the multi-service stream does not.

A ESPN spokesperson said: “We are in active discussions with Dish about their multistream Sling TV service but we have yet to reach an agreement.”

Key to the effort are local TV station markets.