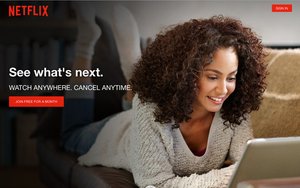 Netflix is a sticky subscription video-on-demand service -- fewer of its customers cancel their monthly service than other top OTT services.

Parks Associates says Netflix has lost 9% of its subscribers, who cancelled its service over the past 12 months. It says Netflix had the lowest churn rate as a percentage of its total subscriber base versus the likes of Amazon and Hulu.

Netflix is still the dominant leader and growing -- with 52% of all U.S. broadband subscribers, around 43 million subscribers.

Amazon had a higher percentage of those unsubscribing -- 19% of its total subscriber base. Amazon had 25% of all U.S. broadband subscribers -- around 22.5 million, according to estimates.

Hulu is in 14% of all U.S. broadband subscribers, about 12.6 million subscribers. Parks says Hulu had a churn rate that equates to about half its subscribers.

Looking at all U.S. broadband subscribers, 20% of U.S. broadband households had cancelled at least one OTT video service in the past 12 months. In second quarter 2015, 18% had done so.

Parks says that 33 new OTT services entered the U.S. market in 2015 -- to total a little more than 100 OTT services overall. Only 5% of U.S. broadband households have a subscription to one or more services beyond Netflix, Amazon, and Hulu.