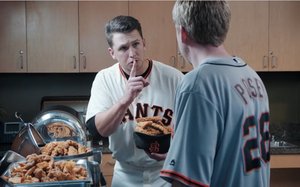 Esurance is launching its second year of its multi-year deal as the exclusive auto insurance sponsor of Major League Baseball.

“New Digs” and “Chicken Strips” offer a comedic take on the “smart choices” Posey has to make in order to save money — from doing his laundry in the locker room to hoarding chicken strips — ultimately showing how Esurance helps people make smart choices when it comes to insurance.

The creative is an extension of the new Esurance advertising campaign “Smart People Get Esurance,” which is part of the brand platform “Insurance for the Modern World.”

In addition to the TV commercials, Posey will play a starring role in a video series, “What Would Buster Do,” on Esurance’s social channels throughout the season. They include “Mime,” “2 Year Old” and “Bullfighter.”

Esurance has also returned as the title sponsor for the all-digital All-Star Game Ballot. Last year, the ballot secured record-breaking voting numbers. This year, when fans vote on their #ASGWorthy players, they’ll have a chance to win a baseball lover’s dream trip: a VIP All-Star Week experience in San Diego.

During MLB All-Star Week, Esurance will engage attendees through interactive activities at FanFest and the Pepsi All-Star Week Block Party.

“In the second year of our partnership, fans are going to see an even greater focus on helping MLB fans connect with their favorite teams and players in new, exciting, and smart ways,” said Alan Gellman, Esurance chief marketing officer, in a release.