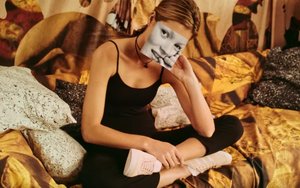 Kate Moss found the ultimate job. She is front-and-center of the latest Adidas campaign without leaving her home. Back in 1993, a 19-year-old Kate Moss was featured in an Adidas campaign wearing Originals classic Gazelle sneakers.
The shoe company and its agency Johannes Leonardo decided to revisit this image for the Originals FUTUREcampaign that is designed to “remember the future.” The new campaign re-appropriates this older image of Moss wearing the shoes in a digital collage-like manner by visual artist Doug Abraham. The agency confirms that Moss okayed the digitized makeover.

The concept not only uniquely plays off its history with Moss, but it is inspired by the history of the Gazelle shoes themselves, which have been "unapologetically stolen from style tribe to style tribe, from the mods to the reggae crowd to the brit pop kids to early 90s grunge," says the agency. Every generation has taken the Gazelle and made it their own. This campaign hands them over to the next generation.

This is a global campaign that runs across many media channels - digital, in-store and print. The campaign also features a film by 1stAveMachine’s Maxime Bruneel, which brings to life the process of creative re-appropriation and how they transformed Moss’s image for the creative.

“Kate Moss is a true icon, and by re-appropriating her 1993 image to create a contemporary one out of it, we are challenging the notion that iconic images from the past are untouchable," stated Ferdinando Verderi, founding member, partner and creative director, Johannes Leonardo. "Our message says ‘Remember the future. Steal from history. Nothing is sacred’ and the meaning is clear: history is not for the archives, it’s your canvas. Be inspired by it, play with it, re-invent it.“