Baseball For All Encourages Girls To Play 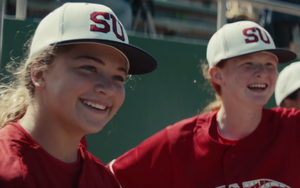 Just in time for the World Series, Baseball for All is launching an effort encouraging more girls to play the game they love.

Created by BBDO Atlanta, the awareness campaign, with the theme “Ready to Play,” includes 60-second and 30-second spots. The film has been posted to YouTube, the Baseball for All Web site and is scheduled to run on ESPNW.com. The non-profit organization is also hoping to secure donated time on stadium jumbotrons and related programming.

The organization was founded by Justine Siegal, the first woman to coach for a Major League Baseball organization.

“If you tell a girl she can’t play baseball, what else does she think she can’t do?” Siegal says in a release. “For girls who love baseball, they can’t imagine playing anything else. Ultimately, we hope to give girls a league of their own. But until then, we’re targeting coaches to help make a real difference.”

The advertising features real girls asking to play the game they love through the lyrics of a beloved song played in every MLB stadium — John Fogerty’s “Centerfield.” It drives viewers to a new Web site for Baseball for All, which invites parents, coaches, and players alike to provide their contact information so the group can help build teams in their local area.

Baseball For All educates the public concerning the importance of providing equal opportunities and provide resources for girls who are told they are not allowed to try out for a school team. It teaches players, parents, and supporters to start teams, leagues, and tournaments of their own.

The advertising was filmed by Will Mayer of PRMRY Films at Siegal’s national tournament, which was held this summer in San Francisco.

“I like baseball, but I love a level playing field even more,” Fitzgerald says in a release. “I have a daughter and a son, and I want them both to have the opportunity to be whatever they want to be. That’s what this is about.”