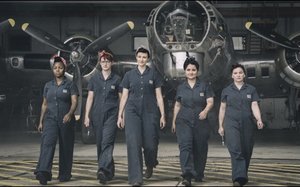 From the inspiring to the sweet to the deeply disturbing, some brands just can’t resist making sure every mom has her day.

Carhartt –in its first national ad for women -- is saluting the rugged, hardworking moms in a spot voiced by a child who has just learned about Rosie the Riveter in school. Called “All Hail Mom,” it features real women doing what women do best in their Carhartts, including welding, farming, chasing chickens and building skyscrapers.

The ad, which the company created in-house, is scheduled to run on HGTV, DIY and USA Networks, as well as all of Carhartt's social media channels.

Hallmark is hoping to win with a sweet and peppy spot called “Every Mom has a signature,” featuring vocals from Meghan Trainor. The Kansas City, Missouri-based greeting card giant is also focusing on a new survey, pinpointing the precise age when women typically first notice that they are turning into their mothers. Turns out that 36 is the magic number, overall, with “Because I said so” most likely to be the triggering phase. But Millennials say it is happening to them at 25, Gen Xers think they turn into mom at 35, while those in the 52-to-70 bracket don’t cross the divide until they are 43. (Only about 53% are happy with the metamorphosis, by the way, with 22% reporting mixed feelings.)

The runner-up most-like-mom phrases include "I'm not going to ask you again;" "Because I'm the mom;" and "I'm not asking, I'm telling." And behaviors that most make women feel like their mom include crying when kids share happy news, repeating some of her behaviors that once drove you nuts, and calling your own mom more frequently.

Probably the least familiar maternal behavior we’ve ever seen? Feeding your adult child Skittles through a grown-up umbilical cord. Called “Umbilical,” it offers an entirely new way to taste the rainbow. We’re betting this one gives you nightmares.