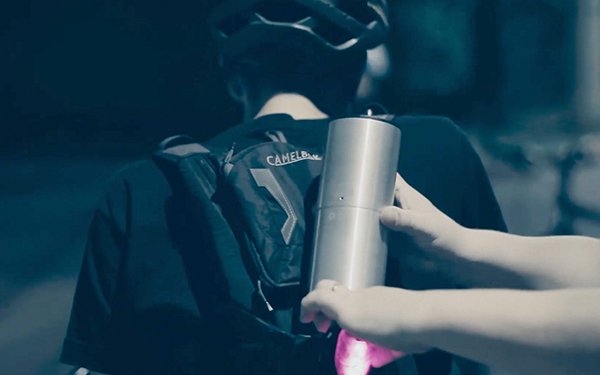 The “Safety Bike Radio” is a portable radio transmitter that interferes with the reception of radio stations in moving vehicles (maximum interference distance: 30 meters), sending alert messages to drivers that bicyclists are nearby.

The technology works with an app that bikers must download and synchronize with a portable radio transmitter that is attached to water bottles that are attached to the bike or the rider. The messages are prerecorded, but cyclists are also able to record their own customized messages as well as communicate in real time with users responding to traffic situations with live transmissions through the app.

In Brazil, as in many countries, including the US, interfering with radio frequencies is generally illegal. But in Brazil exceptions can be made with the approval of stations, which was granted and why the program was allowed to move forward.  98FM invited all radio stations to participate in the “Safety Bike Radio” project.

The project first launched in the Brazilian state of Minas Gerais before expanding to other markets. Awareness spread quickly after the project got picked up by the media, spreading the word through both general and specialized publications, says Isobar. According to the agency the program has had “great support” from radio station owners in the country “who want to get on board and help to save lives."