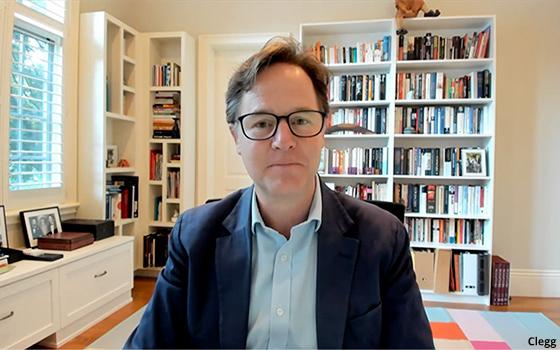 Facebook said it has removed 120,000 pieces of content for violating its voter interference policies prior to the U.S. election.

The social media site tagged warnings to 150 million misleading posts related to the election, and 2.2 million ad submissions have been rejected because they failed to complete the political advertising authorization process.

The news comes amidst mounting pressure on Facebook to stop misinformation ahead of the U.S. election.

The two discussed social platforms, elections that take place worldwide, and the documentary "The Social Dilemma," which talks about stifling free speech and derailing democracy. The documentary about insiders formally in charge at social media companies says that Facebook is a breeding ground for fake news and hate speech that effects the fabric of democracy.

Facebook removes millions of fake accounts a day based on misinformation, Clegg said.

“Last year we removed 6.5 billion fake accounts,” Clegg said. "But this caricature that it’s a bad thing when people have the freedom to speak to each other, and within limits say what they want, when they want and to whom they want … .” The commentator interjected to say that would be a very good thing, but the way these social media platforms are run seems to promote the end to a common shared truth.

Algorithms from Facebook provide people with the information about topics they want to see and read. "Being a former politician, you must see the danger to democracy," he said.

Clegg said there is no company on the planet that has invested as much as Facebook has in its attempt to ensure that people are free to say what they want on its platform, but there are guardrails. There are limits.

The commentator pointed out that Facebook has had major political impact, with 2.7 billion monthly users worldwide, and it’s not just about keeping in touch with relatives and posting baby pictures.

Clegg argued that Facebook is still a place for being playful and sharing family photos and information, as well as a place for small businesses to share content and reach out to consumers. Facebook announced on October 7 that it would ban all political ads that wrongly claim victory after the polls close on November 3.