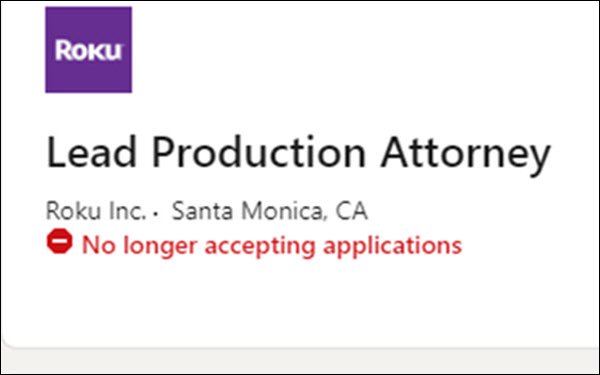 With aggressive advertising growth a core part of its strategy, Roku appears to be jumping feet first into the content business.

Having acquired exclusive rights to the content library of defunct streamer Quibi in last month for its ad-supported Roku Channel, Roku looks to be preparing to produce its own original shows and films.

The company last month began running an ad (above) on LinkedIn for “a lead production attorney for Roku's original episodic and feature length productions," reports Protocol.

LinkedIn now shows the job having been filled.

Roku, which is set to report Q4 and full-year earnings on Thursday, declined to comment on the report.

In reporting Q3 earnings last November, Roku said its services business -- which comprises mainly ad revenue -- had generated more than $1 billion on a 12-month trailing basis by the end of September, Protocol notes.

While it did not specifically break out advertising revenue, Roku reported that 97% of TV advertisers that spent $1 million or more or more with the company in Q3 2019 continued to invest in Q3 2020.

In total, Roku offers advertisers reach to 51.2 million active accounts, and 54% of its users are not pay-TV subscribers, according to the company’s site.